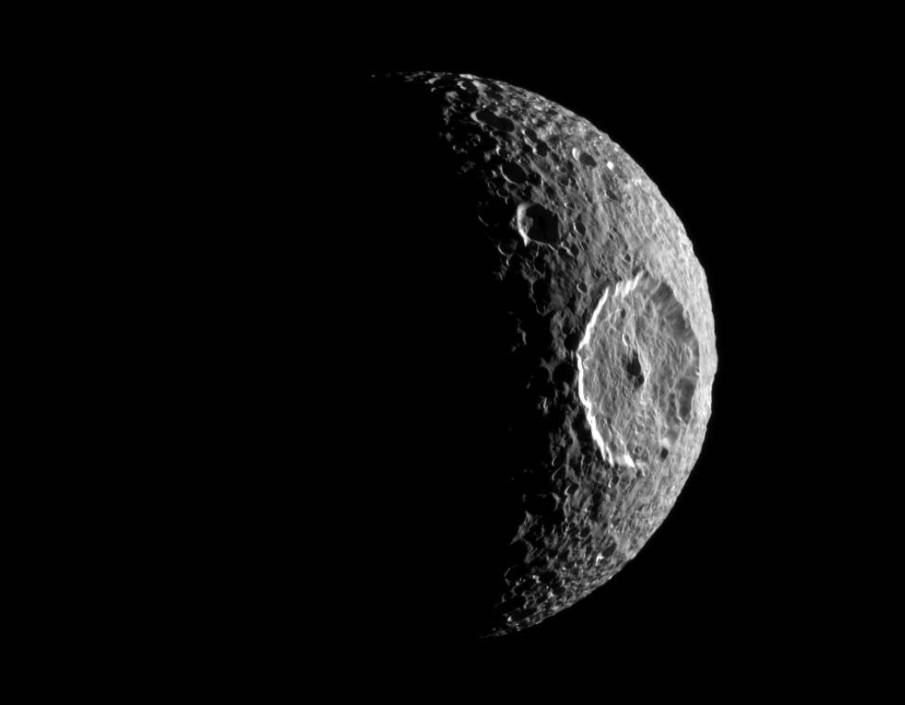 Mimas is Saturn‘s seventh moon and one of the most mysterious objects in the Solar System. One would think that Mimas inspired the Death Star from the 1977 film Star Wars Episode IV: A New Hope, but the movie was made three years before the crater’s discovery by Pioneer 11 in 1979.

Voyager 1, Voyager 2, the Cassini probe in 2010 have visited Mimas since its discovery. Mimas, however, did make a pop culture appearance in Star Trek: The Next Generation, Season 5, Episode 19, The First Duty. The episode featured the moon when Wesley Crusher was beamed to Mimas in an emergency after some suspect piloting Wes and pals, but that’s another issue.

“Mimas” was derived from the “Giants” in Greek mythology. But don’t confuse the Giants with the Titans. Both groups have the same mother and father, Gaia and Uranus.

Although they had the same parents, how the Giants came into this world is just a tad bit odd. Are you ready for this?

The “Giants” arose from the blood of a castrated Uranus after he was knifed by his son, Saturn. The conflict arose because Uranus hated his children. Therefore, he imprisoned them within Gaia, causing her distress. Gaia, the Earth, gave Saturn the knife he used to castrate Gaia when he attempted to lay with her.

Game of Thrones has nothing on Greek mythology.

The terms Gaia and Uranus mean “Earth” and “Sky,” respectively, adding a bit of context. Apparently, that event marked the separation of Earth and the Sky.

Saturn (the Roman equivalent of Cronus in Greek mythology) was the leader of the Titans and ruler of the world for some time. The Giants were the subsequent generation, and both groups fought a great struggle against the more popular Olympian Gods. Saturn’s moons are named after Giants, Titans, or Titanesses.

The names of the seven major moons of Saturn: Rhea, Titan, Enceladus, Iapetus, Dione, Tethys, and Mimas, were suggested by John Herschel in his 1847 publication Results of Astronomical Observations made at the Cape of Good Hope. John Herschel was the son of William Herschel, who discovered Mimas on 17 September 1789.

The largest of Saturn’s moons, Titan, were named after the Titans. I’m not sure why Mimas was the only moon named after a Giant instead of a Titan. Mistaken identity, perhaps? We will never know.

Mimas's Herschel Crater and Other Craters and Chasms

Speaking of Hershel, no visit to Mimas is complete without a trip to the Herschel crater, an adventurer’s wonderland. Mimas is 246 miles in diameter and 81 miles across, slightly less than the land area of Spain. The crater’s size makes the unusually large crater one-third the size of Mimas.

A violent impact created the crater thousands, maybe millions of years ago in Mimas’s young past, thereby giving Mimas its identity and similarity to the Death Star. The impact is peculiar. If whatever hit Mimas was just a tiny bit larger or faster, we wouldn’t be able to visit this fantastic place because the impact would have most likely torn the small world apart.

A visit to the crater would start with rappelling down the 3 mile high walls into the crater and then tour along the numerous trails that meander across the 80-mile floor of this magnificent crater.

A night on the crater floor would be a cold one. Mimas at its warmest is around -290 Fahrenheit and the coldest, a whopping -325! Don’t forget to bring a jacket! You’d want to top off your trip to the crater with a morning climb of the 5-mile high walls of the crater. By comparison, if there was a crater of the same proportional size on Earth, it would be around the size of Australia.

The Herschel crater is not the only impressive geological feature to explore on Mimas; many other craters, chasms, and crater chains exist for you to discover. Although Herschel was named after William Herschel, most of Mimas’ craters were named after characters in Camelot, the musical, the series; they are all the same.

You should also check out Google Map’s Space maps which displays a 3D map of Mimas and many other planets and moons of our Solar System, including Mars, Europa, Titan, and many more!

As a child, my friends and I were fascinated by maps of moons sent back to us by space probes such as Cassini. Mimas was one of our favorites because of the massive Herschel crater, and it resembles the Death Star.

We visualized what a military research base would look like on Mimas with that idea in mind. The Mimas Herschel Military Research Base is a fun poster that can be used for various occasions, including fascinating the mind of a seven-year boy who dreams of traveling the stars…or the Solar System!

As a child, my friends and I were fascinated by maps of moons sent back to us by space probes such as Cassini. Mimas was one of our favorites because of the massive Herschel crater, and it resembles the Death Star.

We visualized what a military research base would look like on Mimas with that idea in mind. The Mimas Herschel Military Research Base is a fun poster that can be used for various occasions, including fascinating the mind of a seven-year boy who dreams of traveling the stars…or the Solar System!

The Solar System is a pretty big place with some exciting worlds. It can be challenging to contextualize eight planets, hundreds of moons, dwarf planets, asteroids, comets, and other bodies.

That’s why we created this excel file that categorizes the celestial bodies of our Solar System based on the information we have available to us today. We derived this information from the International Astronomical Union, the Planetary Habitability Laboratory of the University of Puerto Rico at Arecibo.

The guide includes classifications, orbital groups, mass, radius, and surface gravity of the Sun, the eight planets, their 185 moons, and all known dwarf planets.

The Majesty of Gas Giant Planets