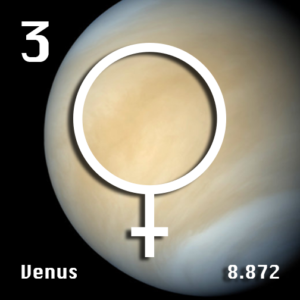 Venus is the second closest planet to the Sun, which means that Mercury is the only planet closer to the Sun. It takes Venus 225 days to complete a revolution around the Sun. One rotation of Venus on its axis takes 243 days, which makes it is the slowest rotating planet in our Solar System. It also rotates completely opposite of every other planet. This means that the Sun would rise in the west and set in the East, as opposed to every other planet in the Solar System. Venus received its name as it was named after a Roman goddess—the goddess of Love. Just behind the moon, Venus is the second brightest object that can be seen at nighttime.
Venus is also one of the four terrestrial planets of our Solar System. It is very much like Earth in terms of its size, mass, and how close it is to the Sun. That’s where similarities end. Venus is the hottest planet in the solar system. Its atmosphere is almost completely carbon dioxide making up 96% of it’s atmosphere. The atmospheric pressure is immense, seeing how it is almost 92 times stronger than it is on the Earth.
The clouds of Venus are highly reflective and made up of sulfuric acid. Due to this, it is almost impossible to see the surface of the planet from space. Venus is very desert-like, with volcanic activity and runaway greenhouse effect which contributes to the extremely hot temperatures coming in at approximately 863 degrees Fahrenheit. Venus while named after the goddess of beauty is one of the unhospitable environments to life we have studied.

Venus was the first to have its movements charted, as early as the 2nd millennium BC, due primarily because it can be seen easily in the night sky. Older cultures thought that Venus was very important to the gods since it was so bright. It was also the first that was visited by a man-made spacecraft since it is so close to us. Mariner 2 visited Venus back in 1962. Detailed maps were very difficult to have since the atmosphere is so thick. In 1991 the Magellan Orbiter was the first to submit such maps. There have been plans made to send other expeditions to Venus, but the extreme heat and other conditions have halted such ideas.

Observing Venus In the Night Sky

Venus is so bright; it comes across as a single point of very bright light at night time. This is the one planet that can be seen at midday, even with the sun out. It’s easier to be seen when the Sun is down closer to the horizon, however. It takes 584 days for Venus to be able to do a lap around the Earth since its orbit is faster than that of the Earth. Often, people may believe that they are witnessing a UFO when they see Venus because it is so bright. Since this planet laps the Earth, it can often go from a bright spot in the morning to a bright spot in the evening. Venus has several different phases, and those are very similar to the Moon whenever they are observed telescopically. It can appear as a small, “full” disc. It can also appear as a larger, “full” disc. It has crescent phases as well, depending on where it is in regards to the Sun. Its atmosphere can also be seen from a telescope because of the amount of sunlight that is refracted off of it. It appears as though the orbit of Venus has a slight incline whenever it is compared to the orbital track that is taken by Earth. A transit of Venus occurs whenever the planet directly crosses between the Sun and another planet. This does not happen very often, as Venus rarely crosses directly in front of the Sun. Every 243 years, a cycle of transits will occur. This cycle occurs because every 243 years, Venus will pass directly in front of the Sun twice, with eight years separating the two transits. This was initially discovered back in 1639. This most recently occurred in 2004 and 2012. The next two will occur in 2117 and 2125. Venus has been seen with the naked eye on several different instances, many of which have been recorded. The maximum brightness of the planet was initially calculated back in 1716 while it was being observed in London. One of the more famous daytime observations occurred back during the inauguration of President Abraham Lincoln in 1865. One of the more mysterious details of Venus lies within the odd “ashen light” that it gives off, actually from the darkened side. This can be seen during those phases in which the planet is shown as a crescent. Even when the dark side doesn’t have light, it gives off a very odd ashen-light. This was first seen back in 1643.

As stated earlier, Venus qualifies as one of the four terrestrial planets that we have in our solar system. This means that it is made up of rocks, much like that of the Earth. It is also very much like the Earth by the size and mass that this planet has. The atmospheric conditions on Venus are very different than that of the Earth, however. The atmosphere is made up almost completely of carbon dioxide, with the rest of it being nitrogen. The Venera landers sent back images in 1975 and again in 1982 which allowed us to see what the surface of Venus looked like. The Magellan orbiter did a great job of mapping out the surface very well in 1990-1991. Volcanoes appeared to have been very active on Venus, which could also explain why there are so many sulphuric clouds. This could lead to the fact that volcanoes could have been recently erupting on the planet. Almost 80% of the surface of Venus consists of smooth plains. There are ridges found on the surface as well. There are two “continents” that also make up a large part of the land on Venus, these continents are made up more of highlands. One of these continents is located in the northern hemisphere, while the other is found in the southern hemisphere. The one located in the north is named after Ishtar, which is the Babylonian goddess of love. The southern continent is named after Aphrodite, which is the Greek goddess of love. The one in the south is larger and appears to be as large as South America. The highest mountain on Venus is approximately seven miles high. There are very few impact craters on the surface of the planet. There is also no evidence of lava flow, which is astounding since there are other types of evidence of volcanoes. There are craters, mountains, and valleys on this planet. There are other structures found on Venus, and these look almost like pancakes. Most of the surface of Venus appears to have been shaped by volcanic activity. There are many more volcanoes located there than are found on Earth. Some of them measure as far as 62 miles across. The surface of Venus is estimated to be between 300-600 million years old. The Soviet Venera 9 orbiter was the first to capture evidence of lightning occurring on Venus. The Venera 12 went a step further by discovering that there was also thunder on this planet. Some believe that volcanic ash could be helping to generate the lightning. Other volcanic information has been gathered by measuring how the sulfur dioxide saturation changes, which could be caused by eruptions. In 2008-2009, four very distinct infrared hot spots were discovered on the surface of the planet. These could have been volcanic eruptions, as the temperature was thought to have been nearly double that of the usually high average temperature. There are roughly 1,000 impact craters on Venus, and almost all of these seem to be evenly distributed. Almost all of these craters are in near-perfect condition. Those on the Earth and the Moon have heavily degraded over time. This shows that Venus underwent a massive surface shift roughly 300-600 million years ago. Following this event, there must have been a drastic decline in the volcanic activity on the planet. Venus does not have the tectonic plates that are found on the Earth. So, the crust of the planet is not constantly recycled as it is on Earth.

The Surface of Venus

The atmosphere of Venus is made up almost entirely of carbon dioxide and nitrogen. Almost 96% of the atmosphere is carbon dioxide. There are very small trace amounts of sulfur dioxide as well. The pressure on the surface of the planet is very comparable to what the pressure would be on the Earth if you were to venture 1 kilometer deep into the ocean. The greenhouse effect on this planet is amazing, so that the surface temperature is 864 degrees Fahrenheit on average. Venus carries much more heat than Mercury, even though it is twice as far away from the Sun. This is largely due to the sulfuric clouds that keep all of the heat at the surface.
It has been studied and found that nearly a billion years ago, the atmosphere and surface of Venus was much like that of the Earth. It also appears that there must have been large amounts of water on the surface as well. The greenhouse effect mentioned before has caused the water to dissipate, and leave the surface more like a desert. Aside from the fact of the hostile environment, there are speculations that there could possibly be living in the clouds of Venus, although these clouds are very acidic.
The temperature of the planet remains mostly constant whether there is a day or night timeframe. Wind on the planet is very slow. However, they are very strong since the surface pressure is so high.
There is almost no season change in temperature on Venus, as there is very little tilt on the axis. The coolest point on the planet is at the top of Maxwell Monte, which is the seven-mile high mountain. It seems as though the clouds on Venus can produce lightning also. This shows that there must be some type of weather activity. A level of ozone was also discovered on Venus back in 2011.

The first robotic space program to have visited Venus would begin with the Soviet Venera program back in 1961. The United States followed up with Mariner 2 missions to Venus in 1962. This also became known as the world’s first successful interplanetary mission, where it descended into the atmosphere of Venus and began to collect data. In 1967, the Venera 4 came from the Soviet Union.
This probe also descended into the atmosphere and began to collect data. It also calculated that the temperature on the surface was much hotter than initially thought by the Mariner 2. This was also the probe that discovered that nearly 95% of the atmosphere was made up of carbon dioxide. Following all of this, there was a combined effort by Americans and Soviets and were called Venera 4-Mariner 5.
In 1974, Mariner 10 visited Venus and noticed the incredibly high wind speeds in the upper atmosphere. In 1975, the Soviets landed on Venus and sent back pictures that were in black and white. In 1978, the United States sent the Pioneer Venus Orbiter and the Pioneer Venus MultiProbe to the planet to gather information. As of 2016, there is a Japanese probe that is still in orbit around Venus, and there are many more possible missions that are being put together. In 2016 NASA made the announcement that it was working on a rover that could handle the extreme conditions of the planet’s landscape. This rover is supposed to be controlled by a computer and it should be wind-powered.