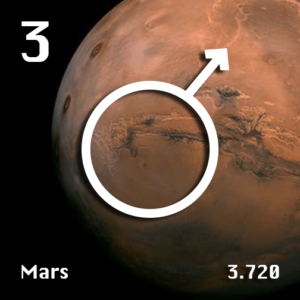 Mars is the fourth-farthest planet from the Sun, directly after the Earth. It is also the second-smallest planet in the Solar System. Only Mercury is smaller than Mars is. Mars was named after a Roman god—the god of war because of its reddish color, which also is where it gets nicknamed the “Red Planet.” Mars gets its reddish color from iron oxides that dominate its surface.

Mar’s surface shares similar features with both the Moon and the Earth, such as impact craters, valleys, mountains, and polar ice caps. Some of those features include Mars’ most prominent peak, Olympus Mons, the largest volcano and second-highest known mountain in the Solar System, and the canyon, Valles Marineris, one of the largest canyons in our Solar System. The Borealis basin in the northern hemisphere covers 40% of the planet and may result from a giant impact feature.

The days and seasons of Mars are comparable to those here on Earth because the rotational period and the tilt of it’s rotational axis relative to the ecliptic are pretty similar.

Because Mars is our neighbor and similar to Earth in various aspects, it is the most explored solar system planet. SpaceX, a leading space organization in the U.S., was founded on the premises getting people to Mars. Scientists are currently assessing the habitability potential of Mars, as well as the possibility of past life. We now have several astrobiology missions are planned, including the Mars 2020 and ExoMars rovers.

Mars has always been connected to various cultures and religions. The ancient Sumerians (ancient Babylonians) believed that Mars was Nergal, their god of war and plague. During those times, Nergal was an insignificance deity, with a cult centered at the city of Nineveh during later times. Mars was referred to as the “star of judgment of the fate of the dead” in Mesopotamian texts.

Ancient Egyptian astronomers recorded Mars as a wandering object in the night sky around 1534 BCE. The Egyptians were also familiar with retrograde motion, or the backward movement of a planet in the sky.
By the time of the Neo-Babylonian Empire, Babylonian astronomers were recording planetary motion and systematic observations of their apparent behavior in the sky. These astronomers knew that Mars made 37 synodic periods (periods against the backdrop of stars in the nighttime sky), precisely 42 circuits of the zodiac, every 79 years. Chineses and Indian texts mentioned Mars and its apparent motion through the sky throughout the fourth and five centuries.

By the 19th century, telescopes had evolved to the point in which Mars’s surface features were visible. In 1877, there was a time where it was closer to the Earth than usual. This allowed an Italian Astronomer to make a very detailed map of the surface of Mars.

Depending on when Mars was observed, there were many different ideas on how it was once on the surface. During seasonal changes, the polar ice caps would melt. Some people would believe that it was a planet that had tons of vegetation. People also thought that there were huge oceans on it. When smaller, less powerful telescopes were used, it appeared as though there were many different canals on the surface of Mars. Once the telescopes were able to be made more robust, those canals no longer appeared.

Mars is one of the four terrestrial planets that are located within our solar system. This planet is made up of rock. The surface of this planet is actually made up of a type of basalt. Most of the surface is covered in oxide dust that is actually more or less just rust. There is no proper magnetic field on the planet. However, there is evidence that the poles of the planet were reversed at some time or other. This shows that there used to be a magnetic field. Much of the planet’s surface shows evidence that it was hit very hard, which resulted in crater formations. There is proof that one impact site measures 6,600 miles by 5,300 miles. This takes up nearly 40% of the surface of the planet. One theory suggests that a planet almost the size of Pluto impacted Mars nearly 4 billion years ago.

Three different periods make up most of the physical surface of Mars. These three periods include the Noachian Period, the Hesperian Period, and the Amazonian Period. The first period seemed to have occurred between 4.5 and 3.5 billion years ago. This is also around the time when liquid water was available on the planet. The second period is thought to be when there was quite a bit of lava on the planet, as there used to be a great deal of volcanic activity. The last period appears to be the one where the least amount of change has occurred. The large mountain Olympus Mons was formed during this period.

The soil on the planet was extensively researched by the Phoenix lander. This soil appeared to be alkaline in nature. It was also rich in chlorine, potassium, magnesium, and sodium. These are the same nutrients that are found on the Earth and are necessary for plants to grow. Several streaks seem to just show up on the surface of the planet. This can be due to movement on the surface. It can also be due to other storms that may come upon the surface. Other theories suggest that there could be water on the surface, allowing colors to change.

Water can’t be on the surface of Mars since the atmospheric pressure is so low. However, the two polar caps have plenty of water ice. In 2008, the Phoenix lander actually sampled Martian water in the soil. Various landforms show water must have been on the surface of the planet at some time or other. Many different landforms suggest no longer any water, yet there used to be a significant amount somewhere on the planet for all of these various bodies to form. There are even minerals that are located on Mars that only show up in the presence of water. There could be a tremendous amount of water located just underground on the planet. Rovers on Mars have shown evidence that there is water under the surface. This could be the reasoning behind the streaks observed from telescopes. During the Martian summer, water could thaw and create those streaks that are observed. They could then later re-freeze.

Mars has only been explored remotely via spacecraft and probes. These explorations usually are geared towards understanding and learning how habitable this planet may be. Several of the missions that were supposed to go there ended up failing before anything happened.

There have been many different spacecraft that are still orbiting Mars and are still sending vast amounts of data back to Earth to be translated and used. Other rovers are still on the planet that is currently working on missions. They are checking to see how habitable the Martian surface is. They are also looking for traces of water. Some of the rovers are still exploring different craters.

Mars exploration began as early as the 1960s. The first successful flyby was by Mariner 4, which was owned by NASA. This was done in 1965. In 1971, Mariner 9 again initiated a flyby around the planet and sent back many data. NASA later sent Viking 1 and Viking 2 to the planet. This was in 1975. Viking 1 relayed information back for six years. Viking 2 relayed information back for three years. These two landers actually sent back color panoramic pictures of the Martian surface. Almost two-thirds of all attempts to explore Mars has failed. This has resulted in the planet gaining a rather negative reputation.

Elon Musk has revealed plans that could quite possibly place nearly one million people on Mars within the next 40 to 100 years. The newest ideas revolve around a rocket that will be launched, sending 100 people up into orbit. The rocket will then return to earth, and land upright in the launching pad. It will then launch again, carrying the necessary fuel for the trip to the planet. It will meet the passengers in orbit, and the trip to Mars will begin.
The company has figured out multiple ways that it can go about saving money as well. The transport ship can actually capture old, unused satellites and bring them back down to Earth. It can also unload massive equipment that will need to be used in orbit around Earth. They also plan to re-use vehicles and rockets so that they won’t need to continue to create new ones. Musk wants to be able to land two different cargo ships on Mars by 2022. He also wants to be able to have humans on Mars by 2024. 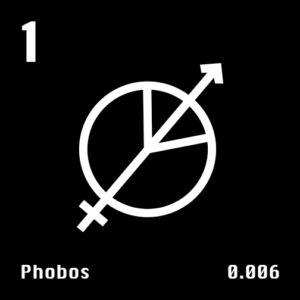 Phobos is the innermost, irregularly shaped moon of Mars and larger of the two moons. It orbits at 3,700 miles away from Mars. This distance brings it closer to its planet than any other moon in the Solar System. Phobos is so close to Mars that that it orbits Mars much faster than Mars rotates, completing an orbit in just 7 hours and 39 minutes. As a result, from the surface of Mars it appears to rise in the west, move across the sky in 4 hours and 15 minutes or less, and set in the east, twice each Martian day. Both Phobos and Deimos were both discovered in 1877 by American astronomer Asaph Hall. Phobos has a radius of 7 miles and is seven times as massive as the outer moon, Deimos. Phobos is named after the Greek god Phobos, son of Mars and Venus and the personification of fear. 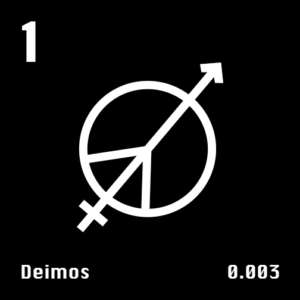 Deimos is the smaller and outermost of the two moon of the planet Mars. Deimos has a radius of 3.9 miles and takes 30.3 hours to orbit Mars at a distance of 14,580 miles. Deimos is non-spherical and consists of rock rich in carbonaceous material, similar to C-type asteroids.
It is cratered, but the surface is noticeably smoother than that of Phobos, caused by the partial filling of craters with regolith. Deimos was discovered by Asaph Hall, III at the US Naval Observatory in Washington, D.C. in 1877 and is named for Deimos who in Greek mythology is the twin brother of Phobos, and personifies terror.