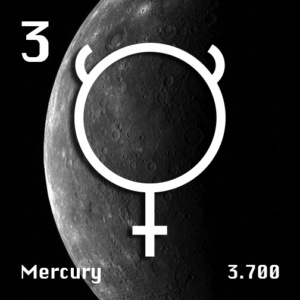 Mercury is the smallest planet in our solar system. It is only a little larger than the Moon. Aside from being the smallest planet, it is also the closest one to the Sun—roughly 38 million miles away. Mercury rotates much more slowly than Earth, making a day on Mercury equivalent to around 59 days on Earth.

Mercury’s year is 88 days which means it rotates on its axis three times for every two revolutions around the Sun. An observer on Mercury would therefore experience one day every two Mercurian years. Mercury’s axis has the smallest tilt of any other planet. Its orbital eccentricity (orbital deviation from a perfect circle) is the largest of the Solar System’s planets. At perihelion, Mercury’s distance from the Sun is only about 66% of its distance at aphelion.

Unlike most planets in our solar system, Mercury has no rings, nor does it have any moons. Since it is so close to the Sun, it has an extremely harsh environment, sharing many similarities with our Moon. Mercury is a terrestrial planet with an exceptionally very thin atmosphere composed of oxygen, helium, potassium, sodium, and hydrogen. Because Mercury has little to no atmosphere, when it is “daylight” on Mercury, the temperature can get above 800 degrees Fahrenheit. “Nighttime” is the extreme opposite, with temperatures that can get below -290 degrees Fahrenheit.

Mercury was first discovered by what appears to have been an Assyrian astronomer in the 14th century BC. Back then, it was known by a name that translates to “the jumping planet.” There are some records of ancient Mercury observations that come from ancient Babylon from the 1st millennium BC. These records referred to Mercury as Nabu.

Ancient Greeks referred to the planet by a name that translates to “the gleaming” because of how the Sun causes the planet to glimmer in the sunlight at dusk. Later, the planet received its actual name when the Romans named it after their god, Mercury, known as a swift messenger. It was given this name because it quickly moves across the sky as its orbit is very short and close to the Sun.

Galileo was the first to observe the planet with a telescope back in the 17th century. However, his telescope wasn’t strong enough to view different phases of Mercury. In 1639 it was discovered that the planet actually orbited around the Sun, as telescopes allowed us to see how it crossed the Sun’s face.

Mercury shines like an evening star in the western sky, setting about an hour after the Sun. Mercury’s apparent magnitude varies in between −2.48 at superior conjunction and +7.25 at inferior conjunction. As a morning “star,” Mercury rises about an hour ahead of the Sun in the eastern sky. There must be a clear, unobstructed horizon on these occasions. Mercury usually appears as a bright “star” with a yellowish or ochre hue.

The brightest or full phase appearance of Mercury is difficult for practical observation because of the extreme proximity of the Sun. Mercury is best observed at quarter phases, although those phrases are of lesser brightness. The quarter phases occur at the greatest elongation east and west of the Sun. Mercury rises at its earliest before sunrise, and at greatest eastern elongation, it sets at its latest after sunset.

Mercury can best be seen from the tropics and subtropics as opposed to higher latitudes on Earth. This is because the ecliptic (the Sun’s apparent path through the sky) intersects the horizon at a steep angle. At this point, Mercury is 10° above the horizon when the planet appears directly above the Sun and is at maximum elongation from the Sun at about 28°. Mercury remains visible after sunset up to the Sun being 18º, maximum.

Mercury’s surface looks very similar to the surface of the Moon’s surface, covered with vast plains and huge craters everywhere. Mercury’s craters indicate that this planet is has been geologically inactive for some time. Mercury is the least understood of the four terrestrial planets since there have only been two space probe missions sent to the planet.

There are many different features on the surface: highlands, mountains, plains, and valleys. Asteroids and comets hit this planet very hard, which can attest to some of the craters seen on it. Comets and asteroids have stricken the entire surface of the planet at some time or other. This happened more often than initially thought because Mercury’s atmosphere is so thin, there is very little that can help protect the surface.

Craters on the surface come in all different kinds of shapes and sizes. There are tiny ones, and then there are some that are several kilometers across. The most giant crater that has been found has a diameter that has been measured as 1,550 kilometers.

Two different plains regions have been located on the planet. These plains are the first things that were observed on Mercury. They are the spaces that are in between all of the different craters. Many various factors help scientists understand that there used to be much volcanic activity on this planet.

These different ridges that are unique to Mercury are thought to have occurred after the planet was formed and the insides had begun to cool. It looks as though the planet itself had started to shrink, which caused those ridges.

The flybys that have happened over time have shown quite a bit about the surface of Mercury. There have been signs that point to volcanic activity, although none that are active. Many different shield volcanoes are located on this planet. Other, very complex compound volcanoes have been found within craters on the surface.

Daylight temperatures are incredibly high on Mercury. That being said, there have also been indications that there could be frozen water on the planet. There could be such water deep within some of the craters that never become exposed to sunlight, and therefore never exposed to any form of heat. Such ice can be found with the help of radar detection. Such detections have been seen located near the poles of the planet. This is where it is typically much cooler, primarily because of less direct exposure to the Sun.

There isn’t much of an atmosphere on the planet. However, since solar winds stir up many elements on the surface, there is an exosphere. Calcium, helium, hydroxide, magnesium, oxygen, potassium, and water vapor are those elements that can help make up the exosphere.

There have been some exploration attempts with space probes. This has been difficult to accomplish because the planet is so close to the Sun. To reach Mercury from the Earth, the probe needs to travel over 57 million miles, all while being pulled into the Sun’s gravitational field. It would actually take up more fuel for a spacecraft that would want to land there than it would take enough fuel for some spacecraft to try and escape the entire solar system.

Messenger is the second probe to be sent to Mercury. Messenger stands for MErcury Surface, Space ENvironment, GEochemistry, and Ranging. This probe made flybys back in 2008. This spacecraft finally crashed on Mercury in 2015, and it left a crater that was roughly 16 meters in diameter.

There is currently another mission that is on its way to this planet. This one is known as BepiColombo. The European and Japanese Space Agencies have gotten together to make this space exploration attempt occur. This probe has two jobs. To map out the surface and understand why it has a magnetic field. It will reach Mercury in 2025.