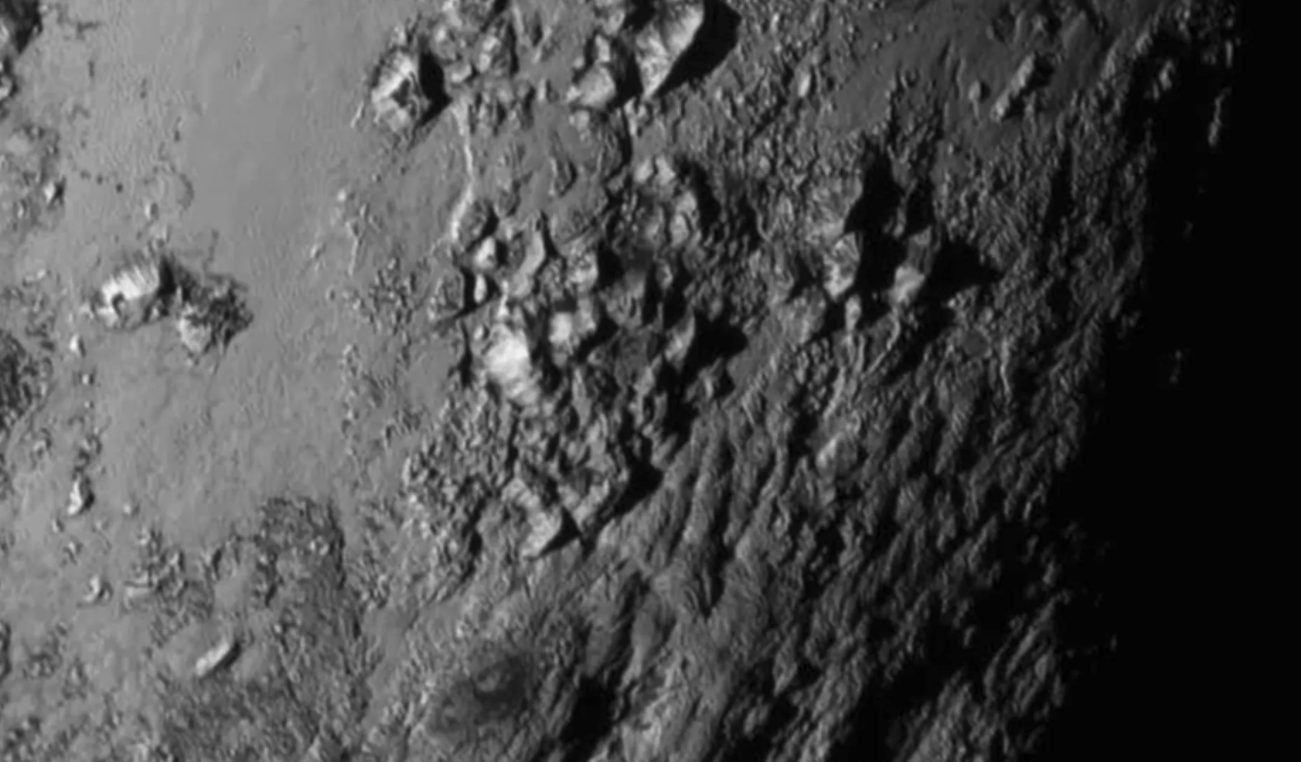 Icy mountains on the surface of Pluto. Photograph: New Horizons/NASA

Pluto was previously considered a planet since its discovery in 1930 by Clyde Tombaugh. Pluto had little resistance to its classification as the ninth planet upon its discovery.

This may have been a slight case of confirmation bias since the presence of a “ninth planet” or “planet X” was hypothesized by Percival Lowell. Lowell believed that the apparent discrepancies of Uranus were the causation of another planet beyond Neptune.

Pluto was within only 6 degrees of the predicted location of the ninth planet predicted by Lowell. However, Lowell predicted that this planet would be around 6.6 the mass of Earth.

As telescopes improved, we were able to learn more about Pluto. In 1950, Gerard Kuiper observed Pluto as a spherical world using a 200-inch telescope at Mount Palomar. Kuiper estimated that Pluto’s diameter was around 5,900 kilometers.

In 1965, Pluto passed near a star allowing astronomers to conclude that Pluto was a small body. As Pluto passed by the star, it blocked a small percentage of light from the star. If Pluto were a giant planet, it would have covered the star and caused an occultation.

At this point, astronomers had a rough estimate regarding Pluto’s size. But what about its mass?

That information came with the discovery of Charon in 1970 by James W. Christy and Robert Sutton Harrington. Using Charon’s orbital period, Harrington was able to calculate the mass of Pluto. Pluto’s mass turned out to be significantly less than what was previously estimated, about one-twentieth the mass of Mercury, making it the smallest planet by a wide margin.

Furthermore, Pluto’s estimated mass, orbital eccentricity, and high orbital inclination also differ significantly from the other planets. Scientists began to consider the possibility that Pluto may not be a planet in the traditional sense after all.

Pluto’s descent from planethood continued into the ’90s. With the discovery of Quaoar, Sedna, Eris, Makemake, and other trans-neptunium objects in the Kuiper Belt with similar characteristics as Pluto, the debate began amongst astronomers as to the true nature of these planetary objects.

Astronomers believe there could be as many as 200 similar objects. These objects had to be classified as planets, or Pluto had to be recategorized.

Robert Harrington estimated Charon’s orbit using the information given to him by James W. Christy. Robert then used this information to compute Pluto’s mass. It was the first time astronomers could make a direct calculation like this — Charon had been the breakthrough they needed. The mass of Pluto was estimated to be just two-tenths of one percent of the Earth.

Nearly 30 years after its discovery, astronomers determined that Pluto was too small to be responsible for orbital discrepancies seen in Uranus and Neptune.

Pluto was finally classified as a dwarf planet in 2006 during the 26th General Assembly of the International Astronomical Union by failing to meet the IAU’s new classification of planets.

The criterion for being classified as a planet are:

Pluto fails to meet the third condition. Pluto’s mass is substantially less than the combined mass of the other objects in its orbit, in contrast to Earth, which is 1.7 million times the mass of objects within its orbit (excluding the Moon).

The IAU further determined that bodies that meet criteria 1 and 2 but do not meet condition three would be called dwarf planets.

There has been resistance by both the public and the astronomical community have resisted the reclassification. Alan Stern, the principal investigator with NASA’s New Horizons mission to Pluto, continues to debate the topic.

By the terms of the new definition, Stern points out that Earth, Mars, Jupiter, and Neptune, all of which share their co-orbits with asteroids, would be excluded. He also argued that all big spherical moons, including the Moon, should likewise be considered planets.

Public reception to the IAU decision was mixed. Many accepted the reclassification, but some sought to overturn the decision with online petitions urging the IAU to consider reinstatement.

A resolution introduced by some members of the California State Assembly facetiously called the IAU decision a “scientific heresy.”

The New Mexico House of Representatives passed a resolution in honor of Tombaugh, declaring that Pluto will always be considered a planet by the state.

This resolution was also made on March 13, 2007, Pluto Planet Day. The Illinois Senate passed a similar resolution in 2009 because Clyde Tombaugh, the discoverer of Pluto, was born in Illinois. The resolution asserted that Pluto was “unfairly downgraded to a ‘dwarf’ planet” by the IAU.”

The IAU got it right. There is no possible way Pluto should be considered a “planet” with equal status as the eight planets. The dwarf planet seems like an accurate designation since it acknowledges that Pluto is a planet of sorts. Pluto shares more characteristics with other worlds of its size, such as Ceres, Eris, Makemake, and Haumea. Even if we were to go back to classifying Pluto as a planet, we’d still draw a distinction between “major” planets and “minor” planets.

Classifying Pluto as a dwarf planet is a cleaner destination, especially since Pluto has more in common with Ceres and Eris than it does with Earth or Saturn.

My only disappointment with IAU is not taking the opportunity to expand upon the standards of what it means to be a planet. I believe size and mass are a significant part of the equation.

This criterion is inferred from the last criterion but leaves too much room for interpretation. Many other characteristics separate Pluto from a planet such as Neptune.

As Mike Brown, discoverer of several trans-neptunium objects, mentioned, “Nostalgia for Pluto is really not a very good planet argument, but that’s basically all there is.”