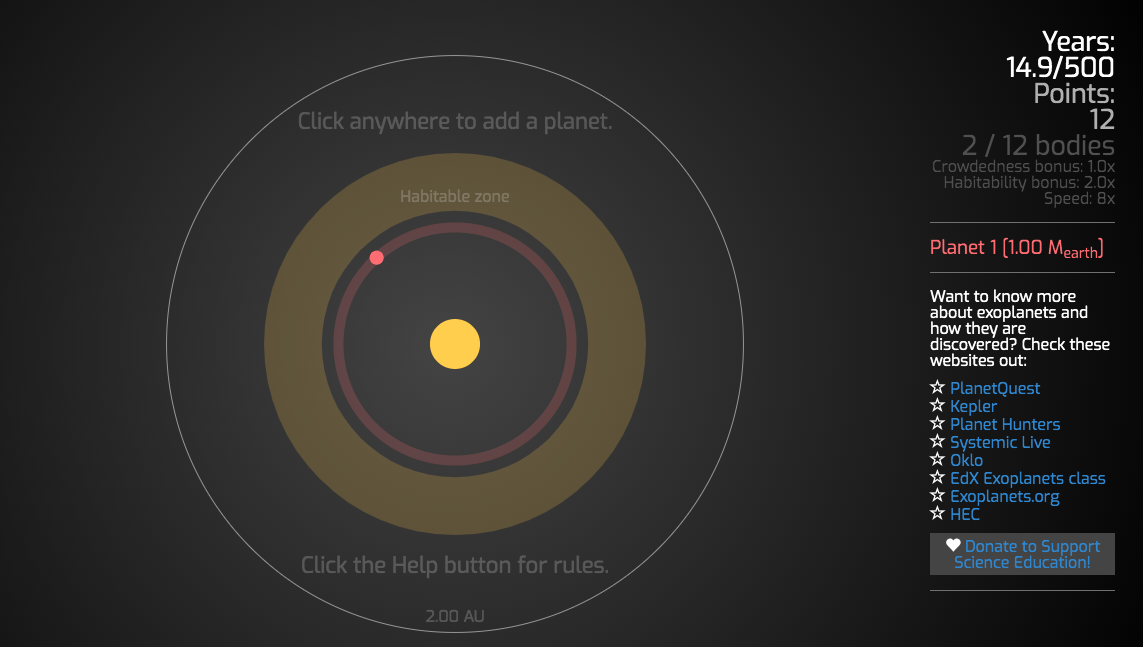 Have you ever wondered how different masses in space interact with each other gravitationally and how stable solar systems form? Then you will want to check out the game Super Planet Crash.

Super Planet Crash is a planetary-gravity game that originated from an open-source program used by astronomers to detect planets outside of our Solar System. The game is the work of Greg Laughlin Stefano Meschairi at UC Santa Cruz.

How To Play Super Planet Crash

The game starts with a single Earth-like planet orbiting a central parent star. The challenge is for players to create a solar system by adding additional masses within a distance of 2 Astronomic Units from the parent star (1 AU is the distance between the Earth and the Sun).

The goal is to create a dense solar system with as many different bodies as possible without causing destabilization. (e.g., erratic orbits that lead to colliding or ejected planets). Gamers can also add in destabilizing factors such as stellar companions that create complex system dynamics and increase destabilization.

Points are collected based on the overall mass of each additional body added to the system and the overall length of time that the system remains stable. Star systems must remain stable for a 500-year interval to receive extra points.

The game ends when the system becomes so overloaded with chaotic and erratic orbitals that stability becomes impossible, and the system eventually fails.

Body Types: When choosing planets, you have a choice of the following planets and stars for your star system:

Star System Templates – There are a few star system template to choose from that allow you to start with slightly different star system configurations.

Tricks To Scoring High in SPC

There are some tricks to achieving a high score in Super Planet Crash. It is possible to boost your score by adding as many brown dwarfs or dwarf stars as possible. By placing dwarfs close to the parent star, their gravity’s powerful nature is less likely to throw off smaller, neighboring bodies. Next, try loading in as many Super-Earths, Ice Giants, and Giant Planets into the Habitable Zone as possible.

You’ll score extra points for “crowdedness.” You can improve your score by loading the outer margins with as many massive planets as possible. By placing large masses either near the parent star or out to the far reaches, gravity is less likely to affect the smaller masses’ orbits in between. Finally, load as many Earth-like planets as possible within the same orbit inside the Habitable Zone. Again, you will receive extra points for ‘crowdedness.’

Are you interested in participating in some real-time exoplanetary science? Stephano Meschairi, the leading developer of Super Planet Crash, has also created Systemic Live.

This free web application allows users to access entire radial velocity data sets from telescopes positioned worldwide. Systemic Live is open-source software that has been utilized by astronomy classes in high schools and colleges across the country.

Users can use the real-time radial velocity data to try their hand at discovering any underlying exoplanetary signals by analyzing gravitational signals cast off by natural star systems and comparing the signals to known planetary system models.

Systemic Live is also linked to several library sets and databases for verification and cross-referencing purposes. The software’s goal is to offer educational opportunities to students and the general public alike on the science of exoplanetary discovery.

Stephano Meschairi believes strongly in the power of open-source education. In addition to developing Super Planet Crash and Systemic Live, he also created Orbits, a fun game with the objective of creating a customized planetary system for an alien race. Orbits game teaches users about planetary motion.

By keeping the science entertaining and light, Meschairi has pushed the limits for creating educational games geared toward the field of astronomic discovery. We can all become citizen scientists and improve our understanding of planetary physics and exoplanetary exploration just for fun because of his efforts.

You can find Super Planet Crash HERE. As mentioned on their site, The Super Planet Crash is a project by Stefano Meschiari and the SAVE/Point team. Feel free to play their other space games at Save Point. They have many more games and apps centered around gravity, exoplanets, and orbital mechanics. It is a go-to for teachers seeking tools to teach the basics of orbital mechanics, gravity, astronomy, and astrophysics.